Getting on Base and the Long Game

By Callie Oettinger | 18 Comments | What It Takes

In his “Acting ‘As If’” post last week, Shawn wrote:

“Our books are not Frontlist. They are backlist, evergreen, long-term commitments. So we spend weeks, months, years on every single one we put out there in an effort to reach what we think is the publisher’s job . . . getting the book into the hands of 10,000 readers. We have plans to promote all of our titles every chance we get, in any way we can do it, for as long as we’re around.”

How is this accomplished?

By getting on base and playing the long game.

“Your job is to get on base,” says my son’s baseball coach. Ego likes a line drive, resulting in a double or triple, but, end of day, the goal of getting on base eclipses the how of getting on base. Just get there.

In outreach terms, this means focusing on what makes sense, rather than on what Ego wants. Just like a homerun, a weeklong New York City publicity blitz can feed Ego, but just like a homerun, it isn’t a guaranteed grand slam. You can hit it out of the park, but that homerun won’t guarantee more runs batted in than any other type of hit. In other words, a media storm focusing on your book can result in your book being the “it” topic of the week, but it isn’t a guarantee that the book will hit the bestseller list—or sell that many books period.

Going back to Shawn’s “Acting ‘As If’” post, Black Irish Books plays to get on base, just as if it was a Big 5 publisher, but it’s prepped for drawing a walk and advancing play that way, too. Walks aren’t a Big 5 strength. They slow down the game and eat through the time the Big 5 have allotted for outreach. Their business model is focused on larger quantities, on which each title is given a set amount of time to succeed. 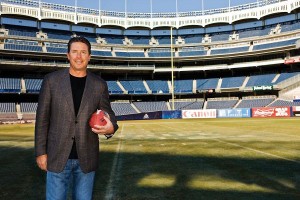 Adding a little football to the mix: Think Dan Marino. Marino’s one of the best quarterbacks of all time, yet his fingers are void of Superbowl rings. Marino was drafted 27th in the 1983 NFL draft, with five quarterbacks preceding him. “Some, like Jim Kelly and John Elway, went on to have splendid careers,” wrote Kristian Dyer for Yahoo Sports. “Others such as Tony Eason and Todd Blackledge, well, not so much.”

Marino’s a backlist bestseller. He didn’t launch at the top of the list, but he outlasted and outplayed many of the others who launched that same year.

When you’re playing for a lifetime instead of for a season, you’ll find yourself adjusting the view.

You’ll approach the producer at that big nationwide television show, but you’ll also approach the grandmother who leads a book talk discussion at her church, as well as the student who has to do a persuasive talk in front of his class about his favorite topic (and cites heavily from your book), and that CEO who gives away copies of books as gifts, as well as a long list of other individuals with varied backgrounds. Reaching out to them takes a long time, but, in time… Their reach expands. That young kid will grow into the CEO giving away your books, and that grandmother’s family and friends will pick up the call she started. At the same time, that producer who never answered your calls will have burnt out and become a publicist, and that journalist you sent pitch after pitch to will accept the buy-out from his paper and retire. The guest booker will book a career-ending fake interview by mistake, in his rush to get someone on air for a breaking news story, and the editor will decide it’s time to retire when her magazine folds. Yet, your readers . . . They’ll still be there.

If you focus on outlets over people, or on lists or rings or wins over relationships, you’ll stall out early. If you’re lucky, you’ll achieve success, but it won’t be sustainable unless you’re there for the long game. Stick it out. Get on base and then go long.

Posted in What It Takes